FREE SHIPPING ON ORDERS $55 OR MORE

Few places churn up your sense of imagination like Bagan, Myanmar.  An open plain set against the  Irrawaddy river, Bagan is home to over 4000 ancient Buddhist temples dating back over 1000 years.  They seem to be everywhere, but the magnificent effort put into the building of each structure cannot be overlooked.  At one point as many as 10000 temples, pagodas and monasteries were peppered across the land.  Time takes its toll however, and many centuries of neglect, and natural disasters have eroded the old site to what is today. Which is still outstanding.

Tina and I put on our brave hats, and boarded a short flight from Yangon to Bagan, eager to get a glimpse into the past.  We safely arrived, and were quickly taken with how many temples were in plain view as we drove to our hotel.  We pimped out a bit for this leg, and nestled into our resort, which sported a stunning pool on an immaculate grounds, overlooking the beautiful river.  We had 3 days to take in the region before moving on, and as day 1 was an afternoon arrival, we enjoyed the luxury of our resort, as we prepared for a sunrise morning to go explore. 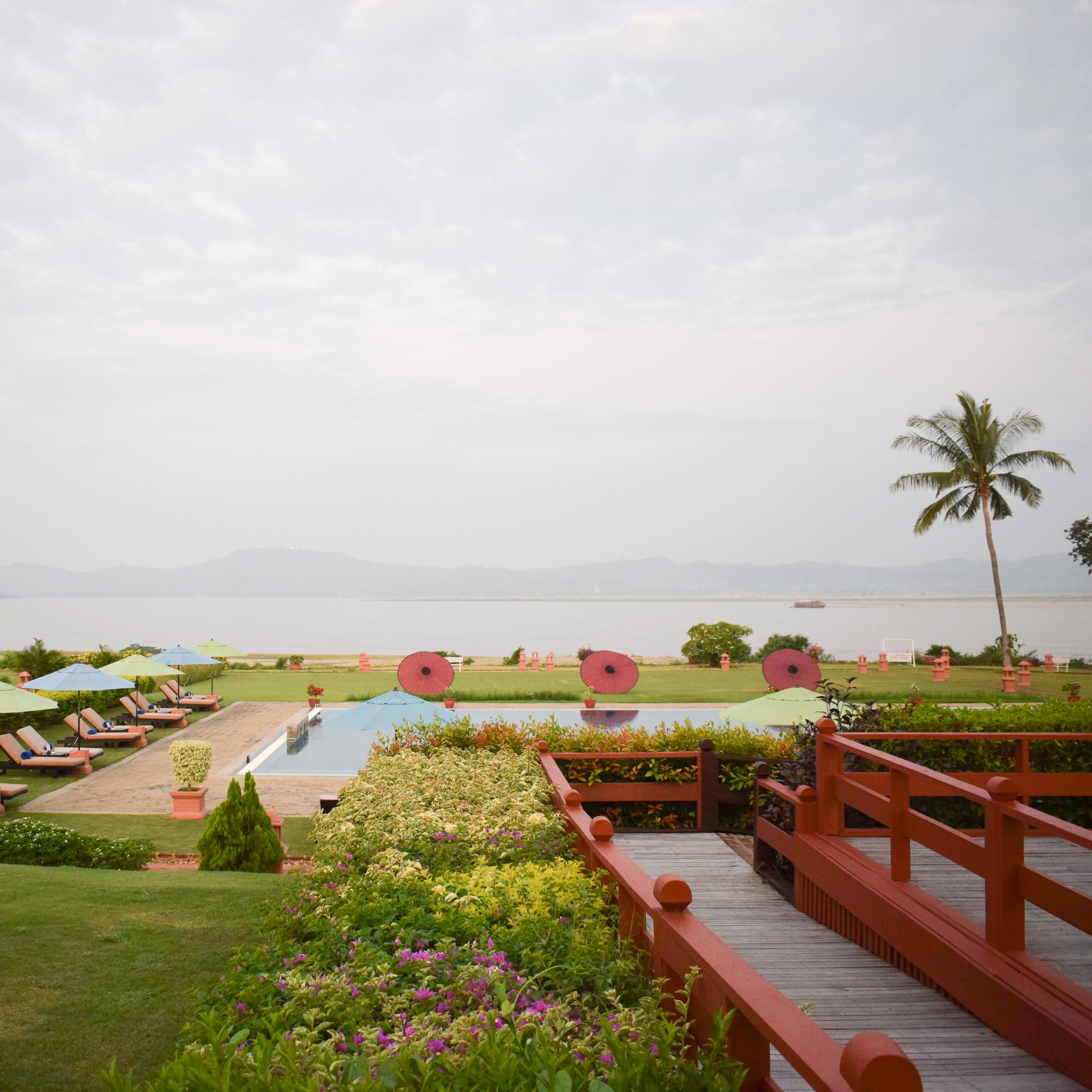 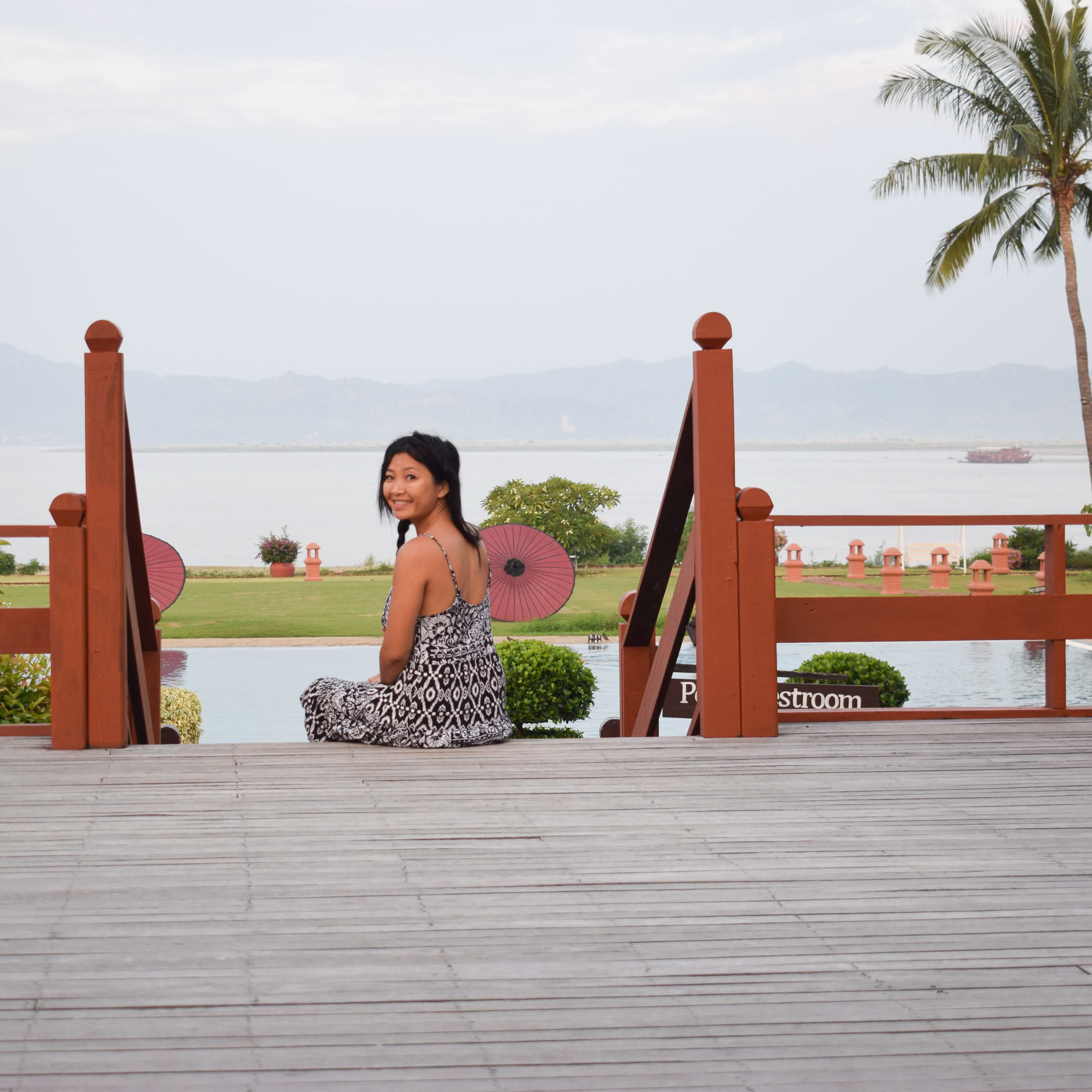 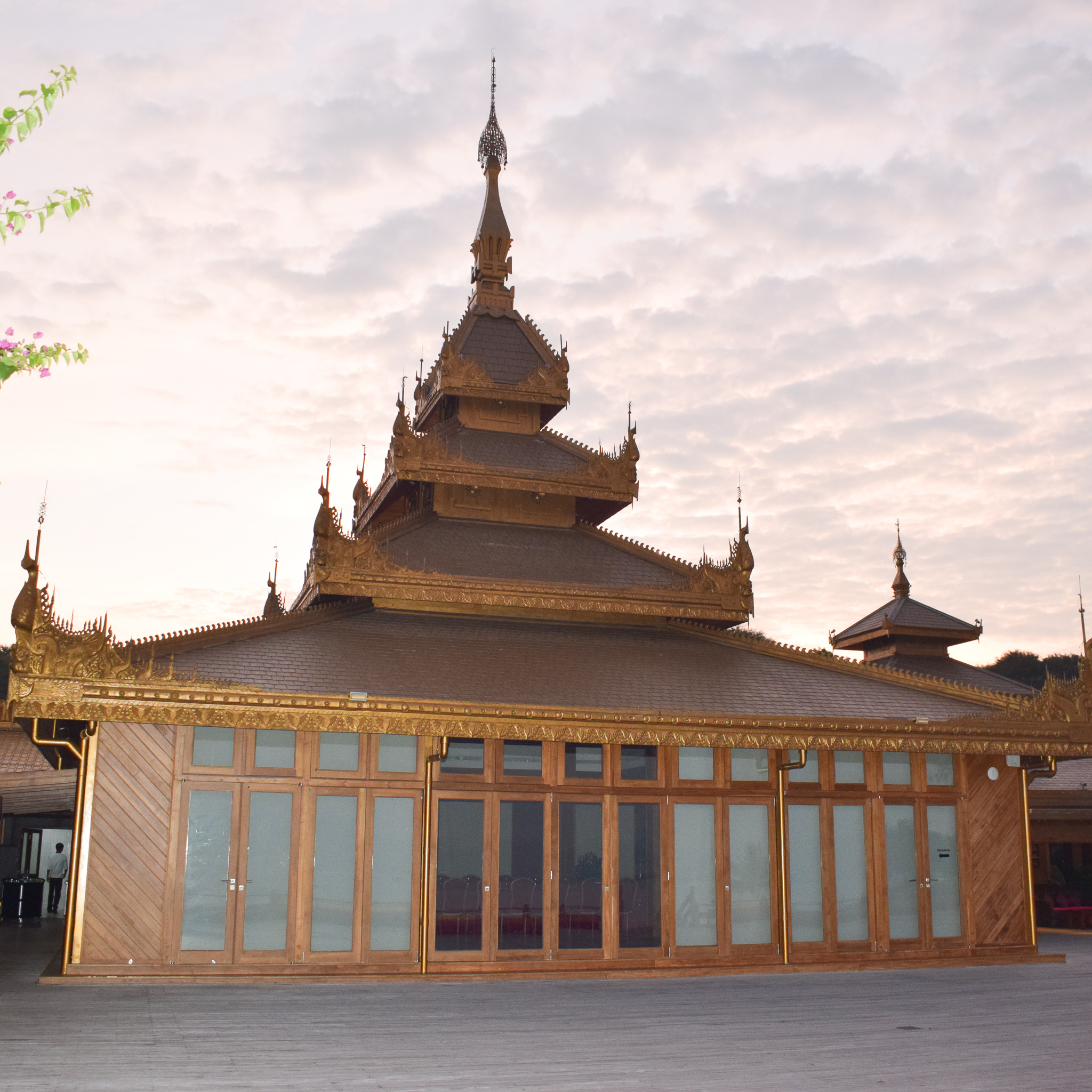 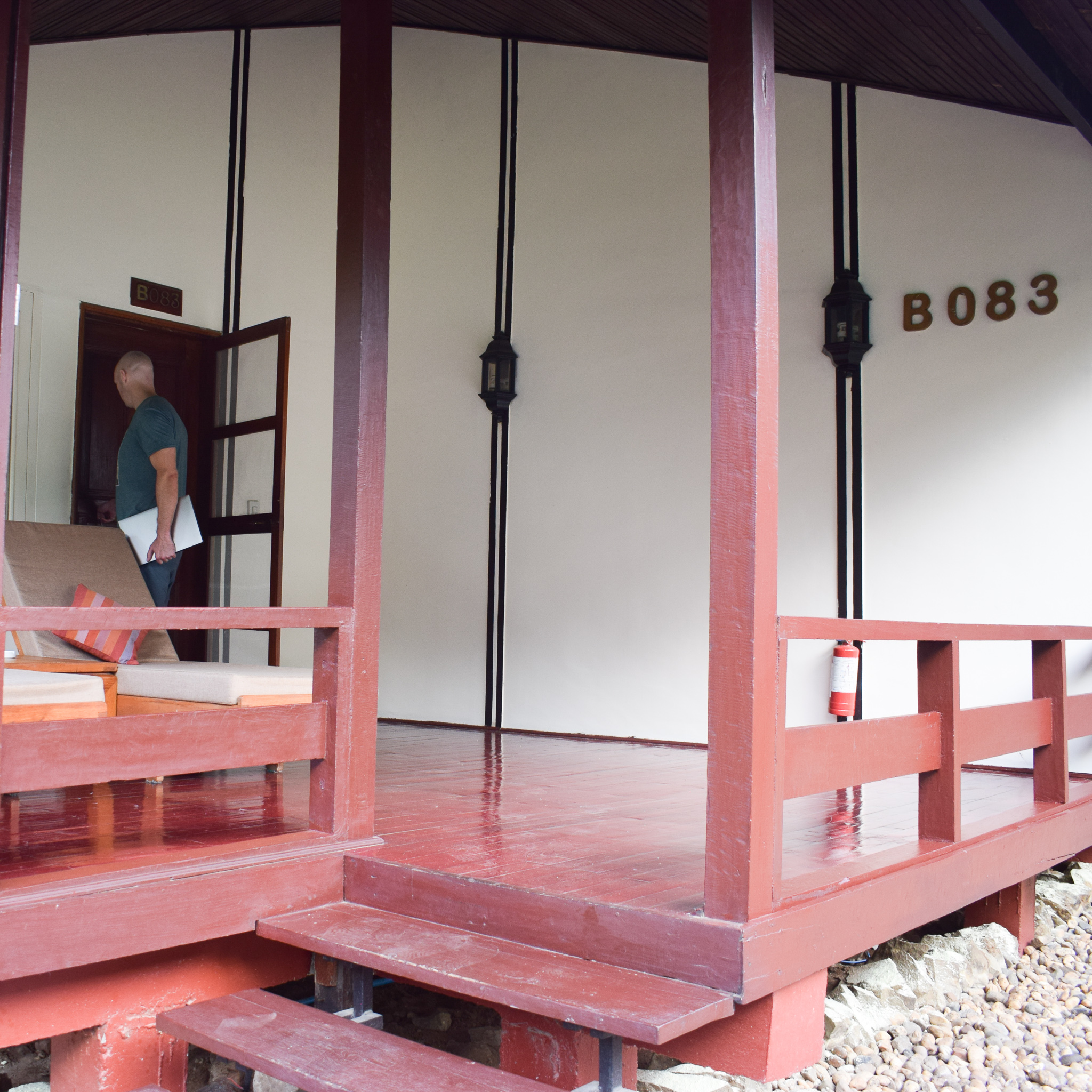 Sunrise soon came, and we hopped on electric scooters rented from the resort to go see the temples on our own terms. Tina had not spent much time on bikes in Asia, but thankfully this was a very tame region to get her bearings which she did quickly.  First up we came across a beautiful grouping of 4 temples, and became aware of what a remarkable site this was going to be. Stunning in their structure and beauty, we roamed and grabbed photos as we could.

We came across a larger temple which had a local artist manning the gates. He offered to take us on a tour inside, which included thousand year old wall paintings in a corridor which surrounded an enormous Buddha. The building was built so that windows would cast light directly onto the Buddha. It was truly stunning. After the tour and a few barefoot steps in bat poop, our guide showed us some brilliant art work which he created.  Different than the usual oppressive hawking you find in other places in Asia, he was gentle, and gracious as we had a look. We ended up grabbing a couple of wall hangings  and thanked him before moving on.

Tina’s Travel Tips
Bring some small bills to tip the guides at each temple if they offer you some of their time. Or possibly buy some of the items they have on sale. 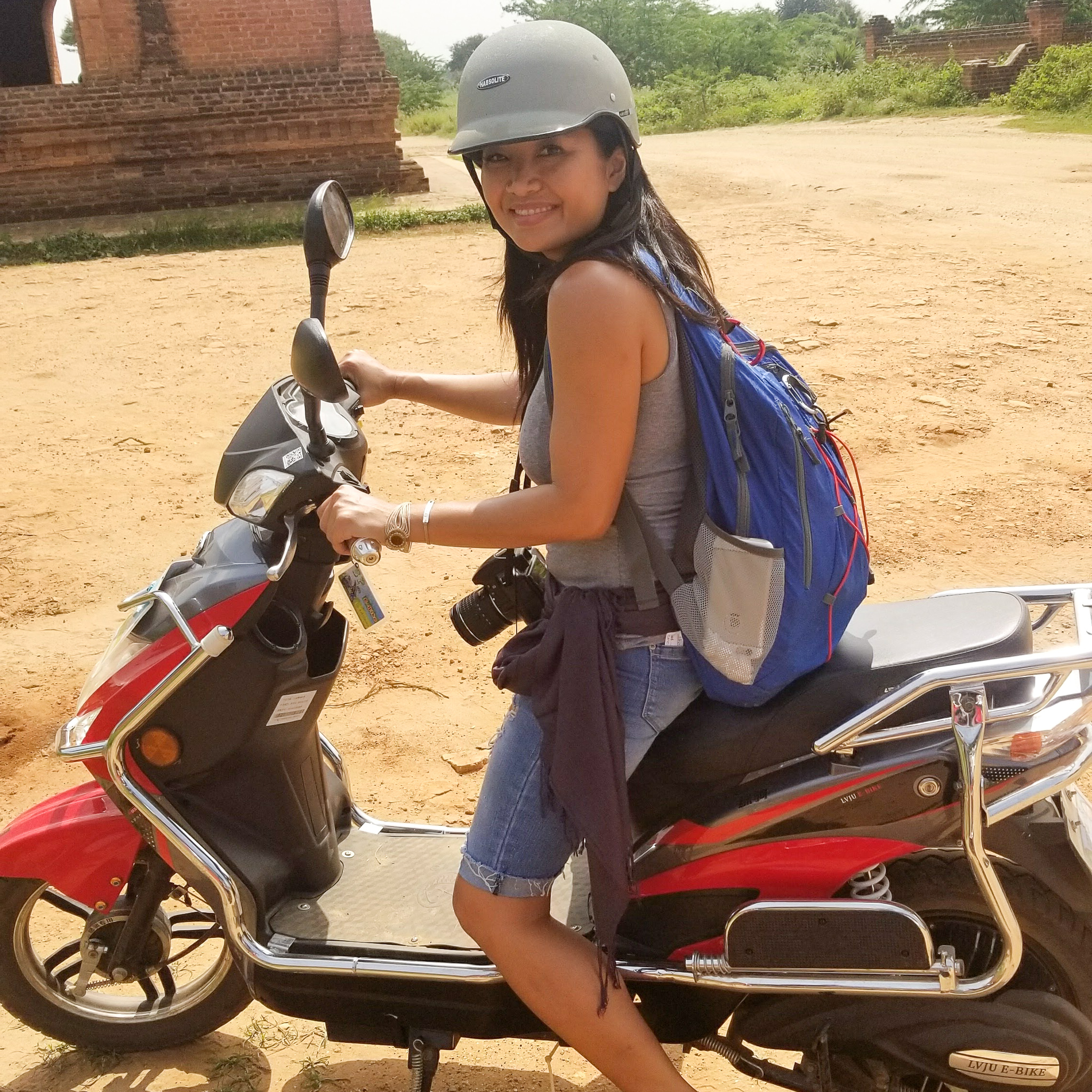 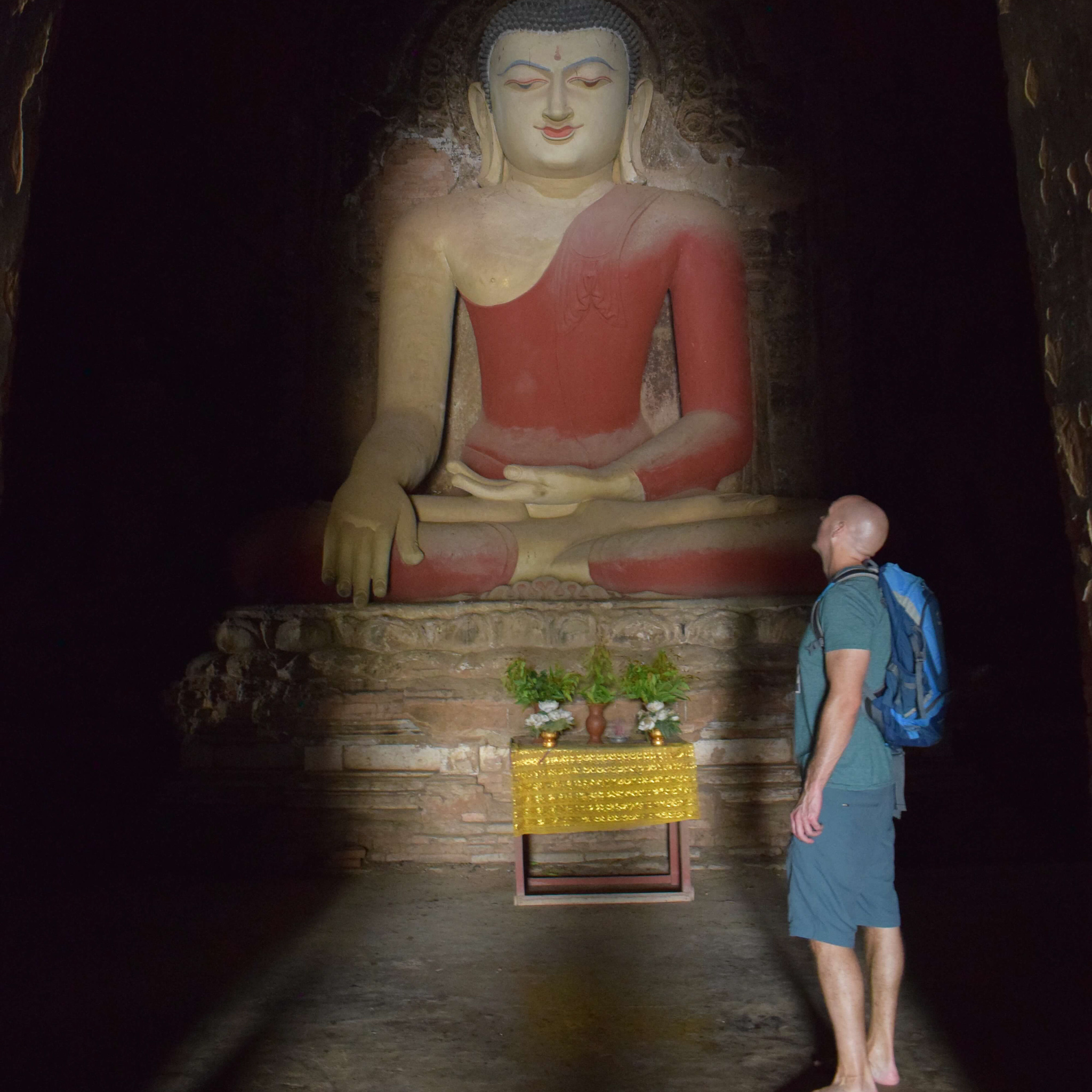 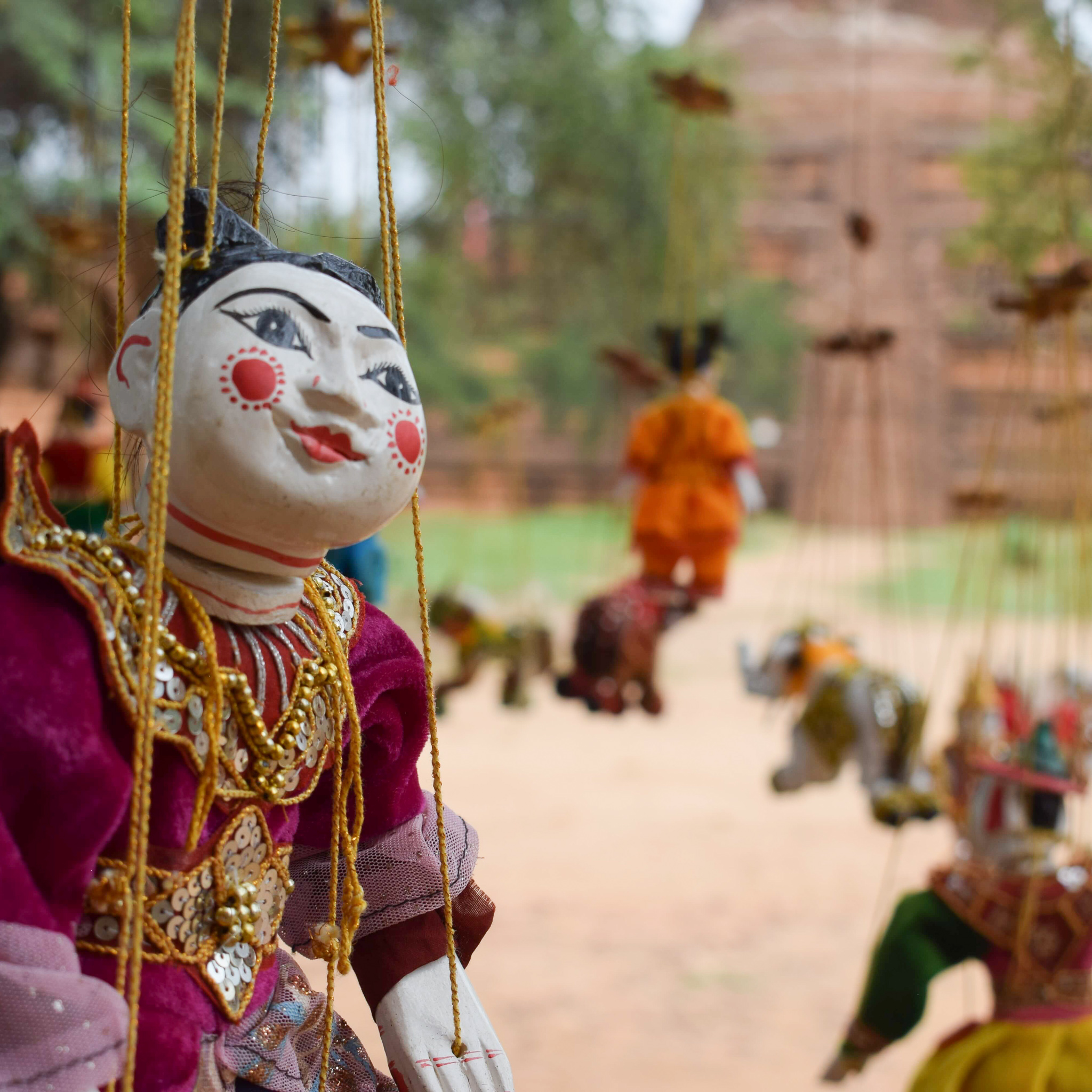 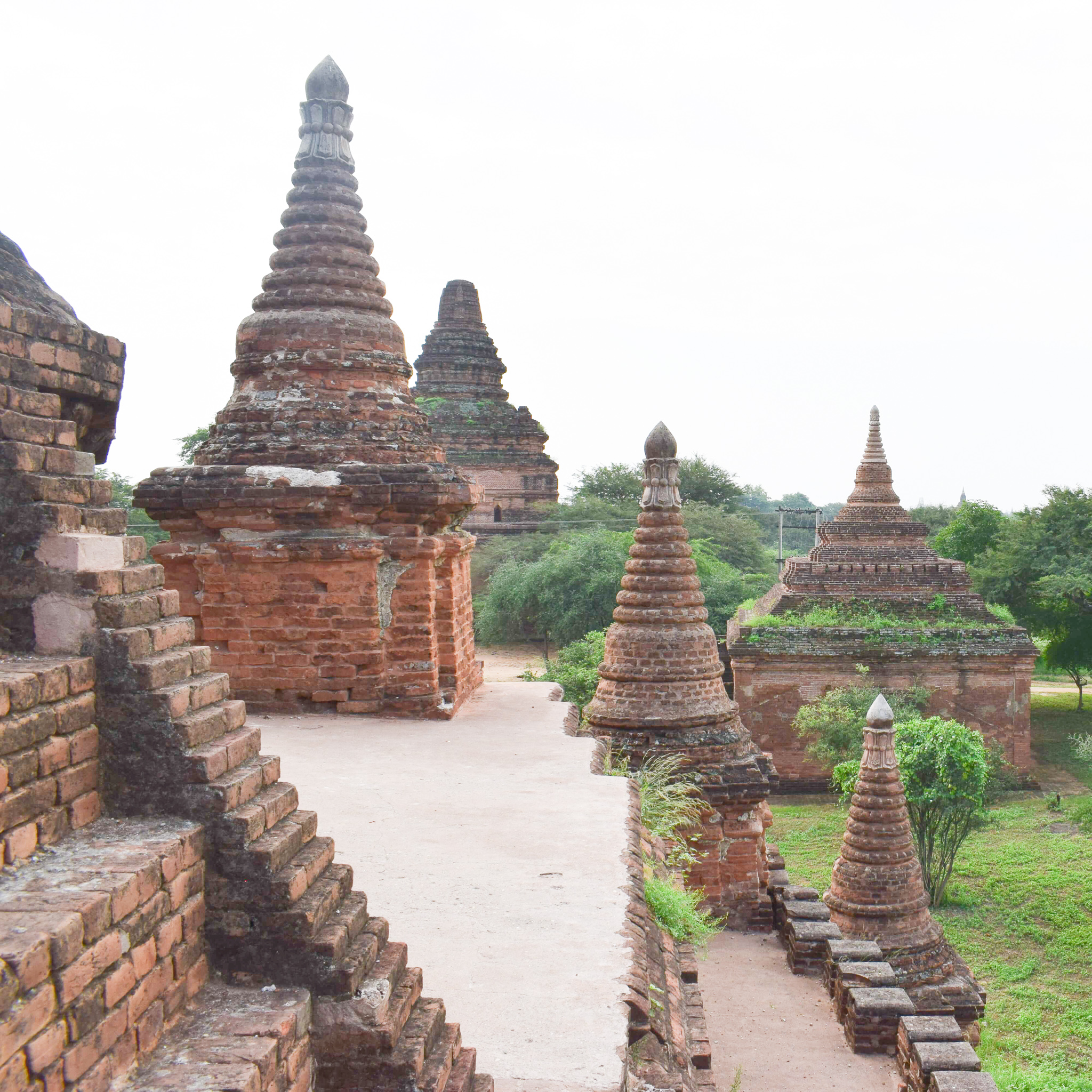 It’s hard to describe the day we had roaming from temple to temple. Some enormous, some elaborate, and some beautifully simple. We wandered around the stairs and edges of the exteriors, and circled through corridors of some interiors.  There seemed to be no end to the options for exploring.

We had a slight hiccup at one point, as we finished touring a large structure, Tina realized she didn’t have the key to her scooter :-|.  We backtracked a bit, and thankfully, a lovely local girl who had greeted us at a previous temple, yelled to us that she had our key…. Dodged one there, not sure what the options would have been otherwise! (Tina says: I’ve not seen Steve so irked before so I walked the temple a few times to try to find the key. “I” believe there would’ve been a way to dodge it…like go back to the scooter company and figure a solution? But I’m happy the key was found. LOL)

After working up an appetite seeing the sprawl, we headed into the town of Old Bagan to grab some grub by the riverside. Town of Old Bagan may not quite capture the village. It was quite ancient with the locals living in some bare bones accommodation.  Lots of horses and cows were littered in dusty streets, as we biked by into lunch.

Tina’s Travel Tips
For the ladies not wanting to sweat in the raging heat, pack a light shawl and sarong to cover up as  you enter the larger temples to show respect. 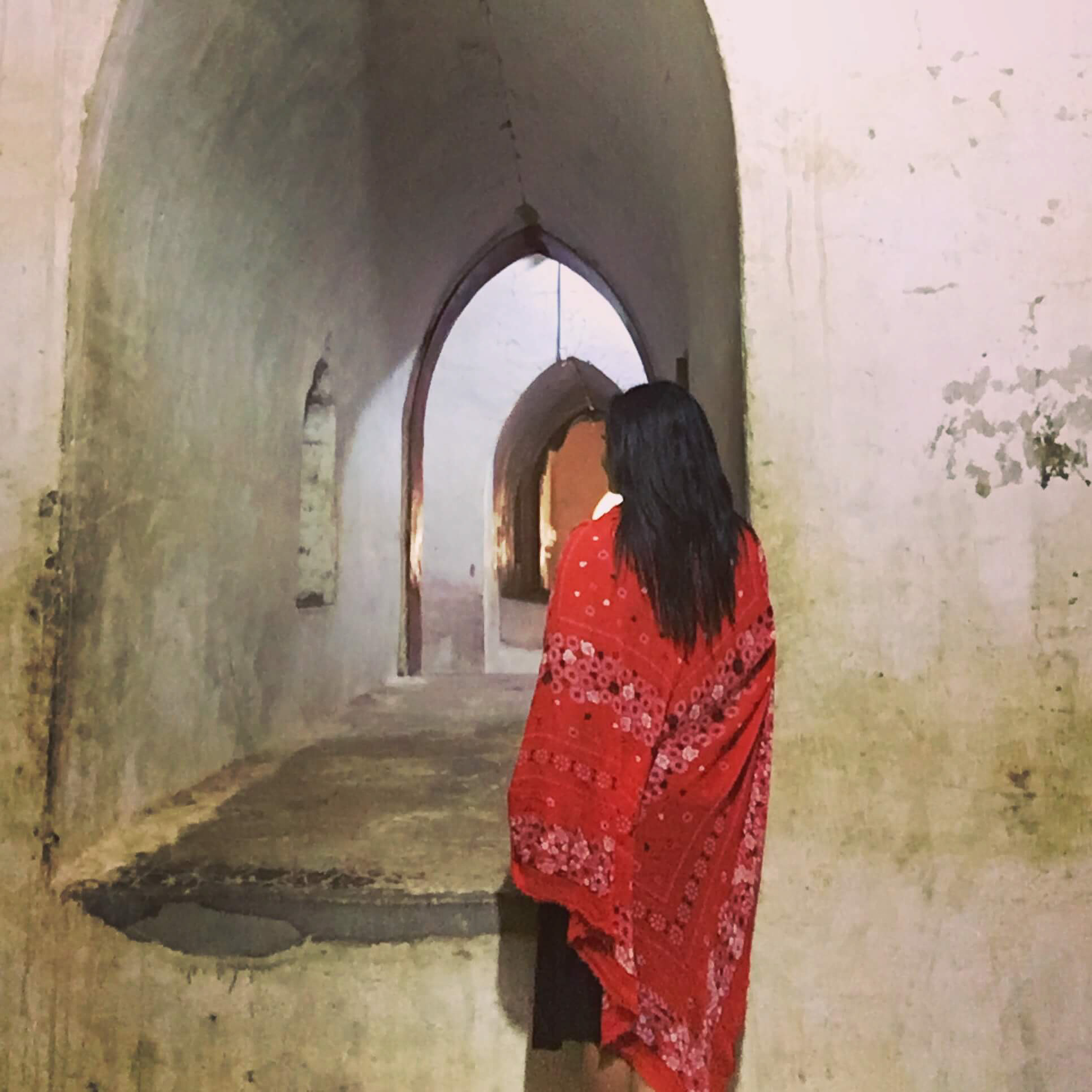 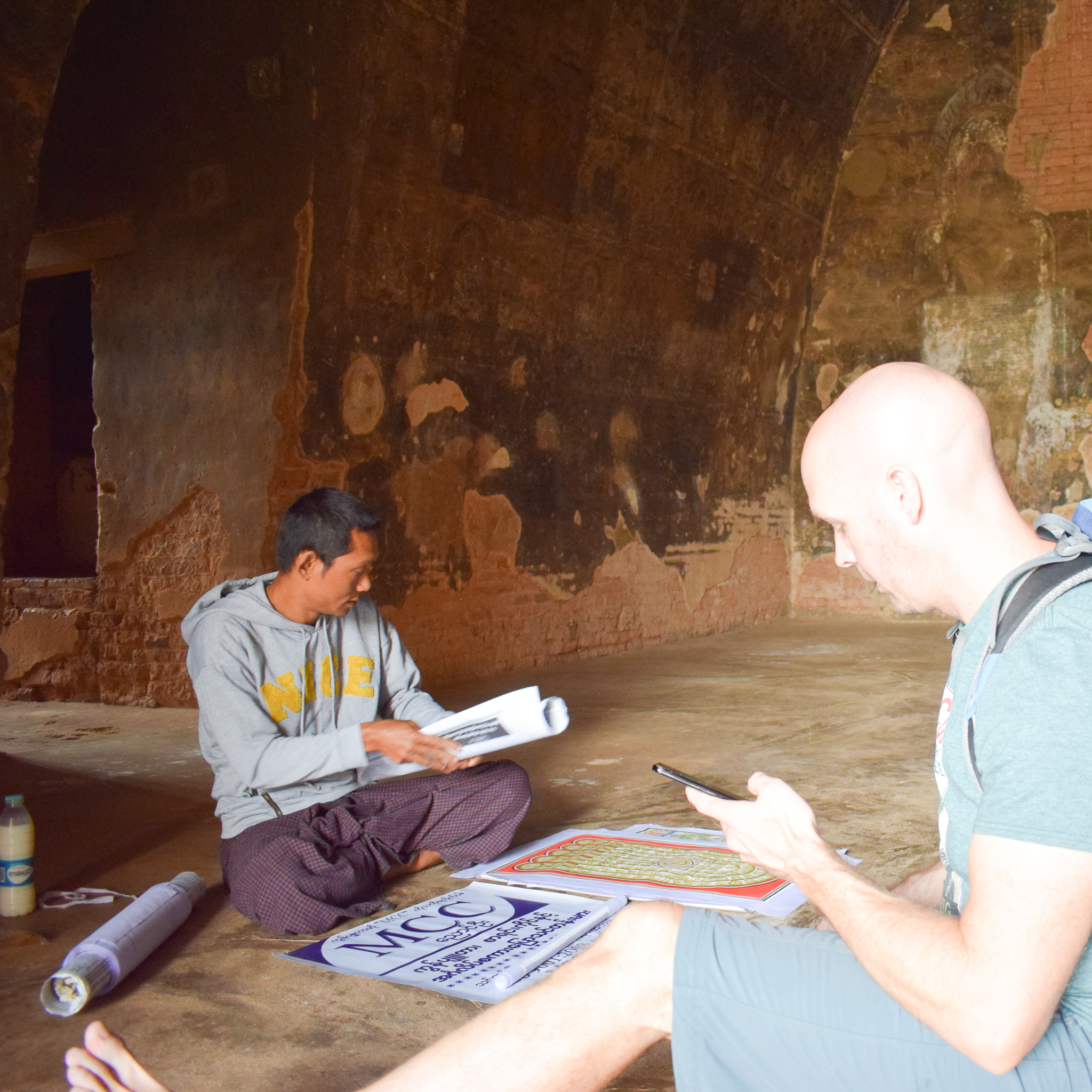 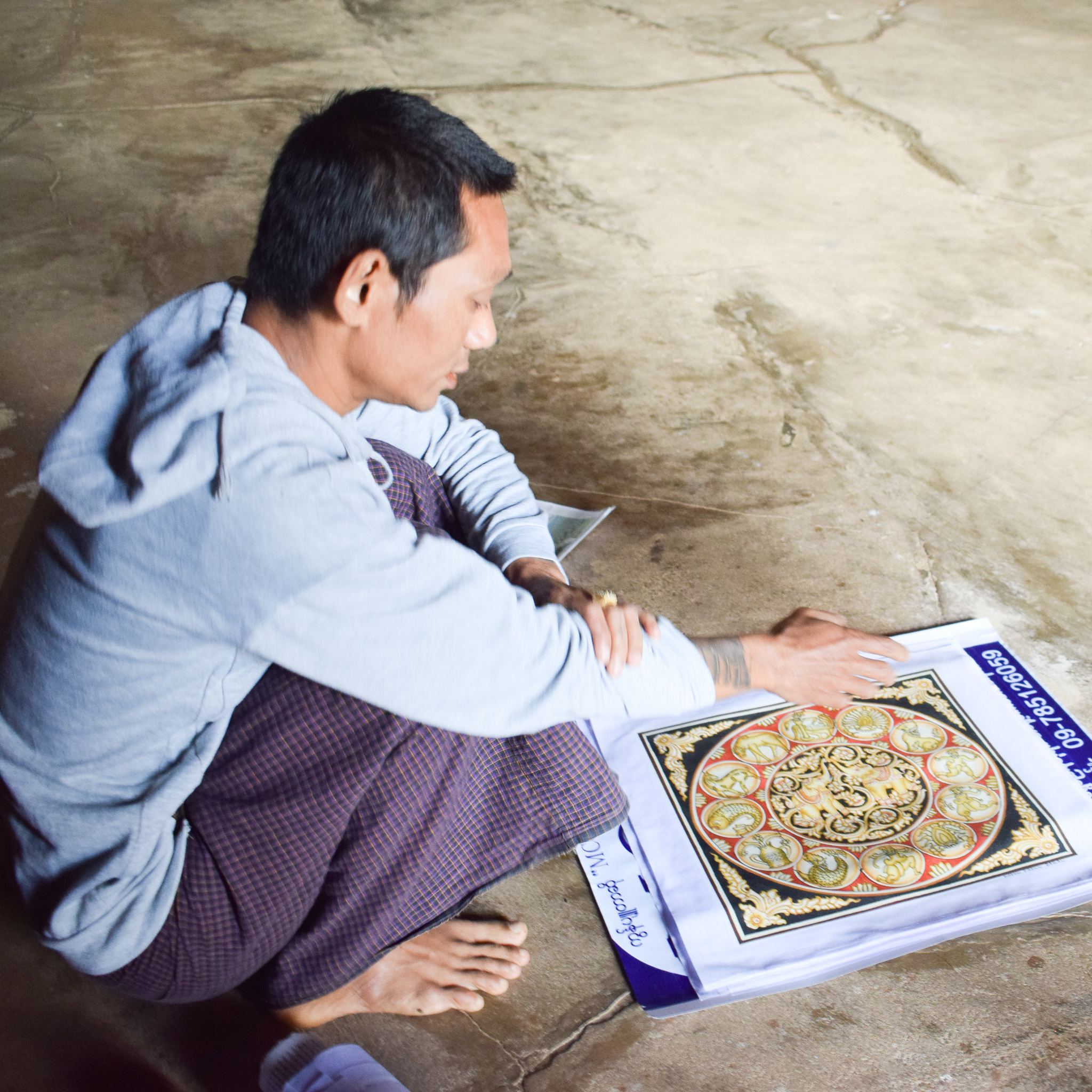 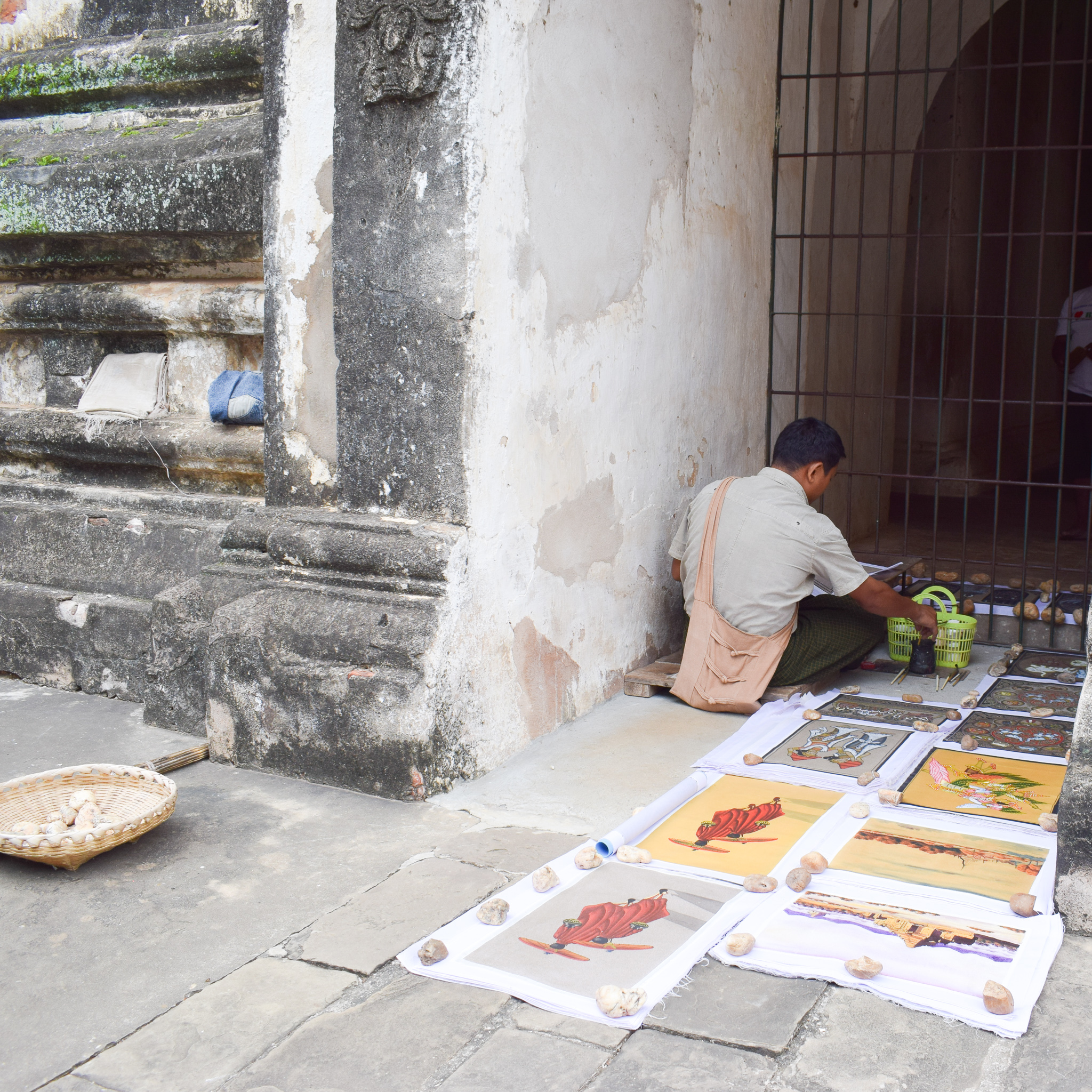 Having hit the temples at the wee hours of the morning, we were pretty wiped after lunch, and headed back to our luxury for some celebratory beers. We winded down the day chatting with some other guests and enjoying the fact that we were well on our way into our trip.

The next morning we were up again at the crack of dawn. We had met a lovely couple from Colorado, Jen and Lyle, whom were taking 4 months travel after an early retirement.  They had booked a car to go to see the hot air balloons take off over the plain, at sunrise.  A popular tourist attraction for $350 USD per person, you can cruise across the sky in a balloon, overlooking the temples below.  Our driver got us to the take-off site, just before the sunrise, but much to many people’s disappointment, the day was cancelled due to bad winds. Thankfully, we weren’t one of the balloon riders.  We took the chance to use the driver to see a couple more temples before hitting the resort for a well earned breakfast.

Tina and I wiled away the rest of the day over beers and a delicious set of spring rolls (many orders) that were on offer. Feeling a bit templed out, we rested up for our next destination. We were heading the next day a 6 hour drive east to the trekking town of Kalaw. We had booked a 3 day,  2 night hill tribe trek to Inle Lake which would cover 57 Km of walking and sleeping in remote Myanmar villages. 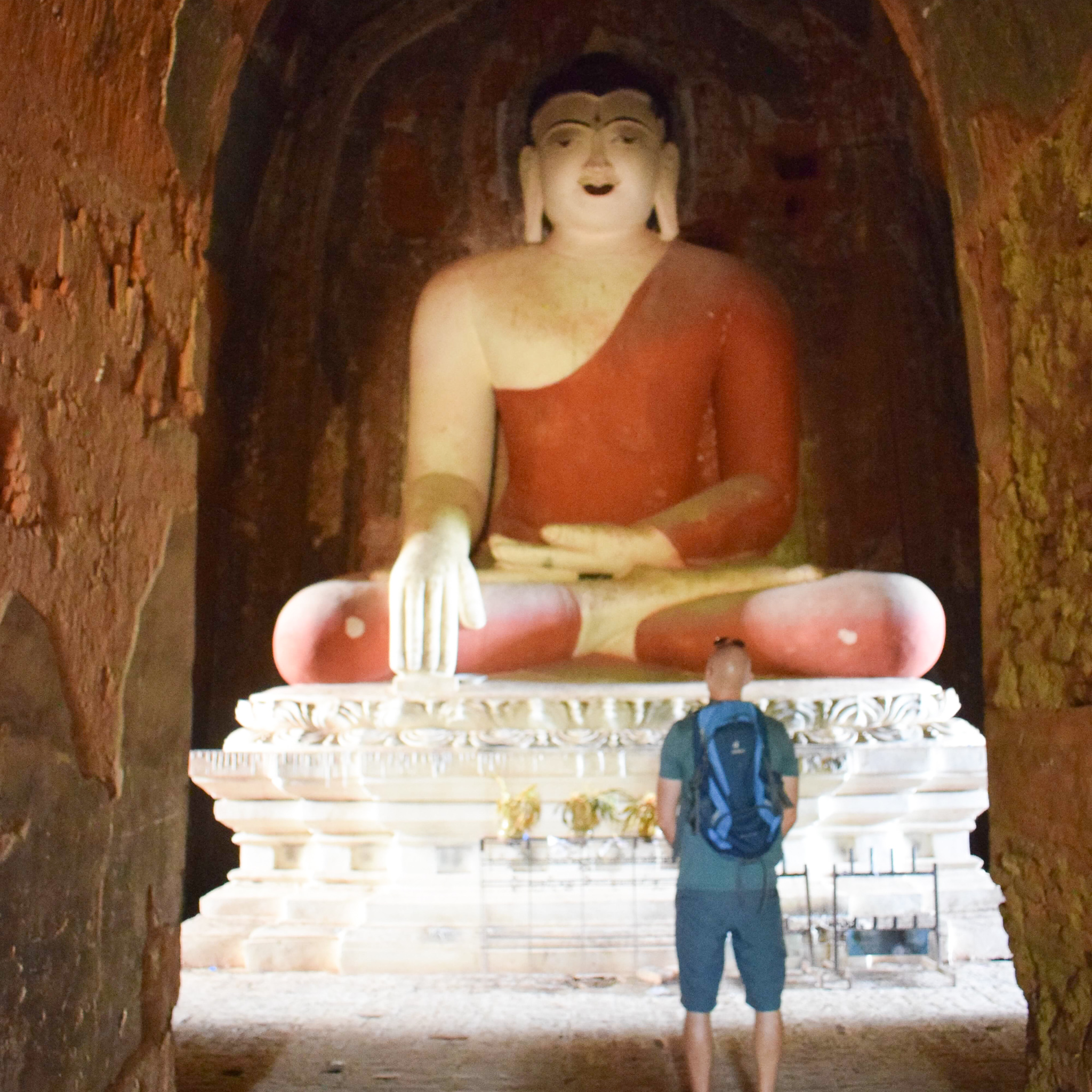 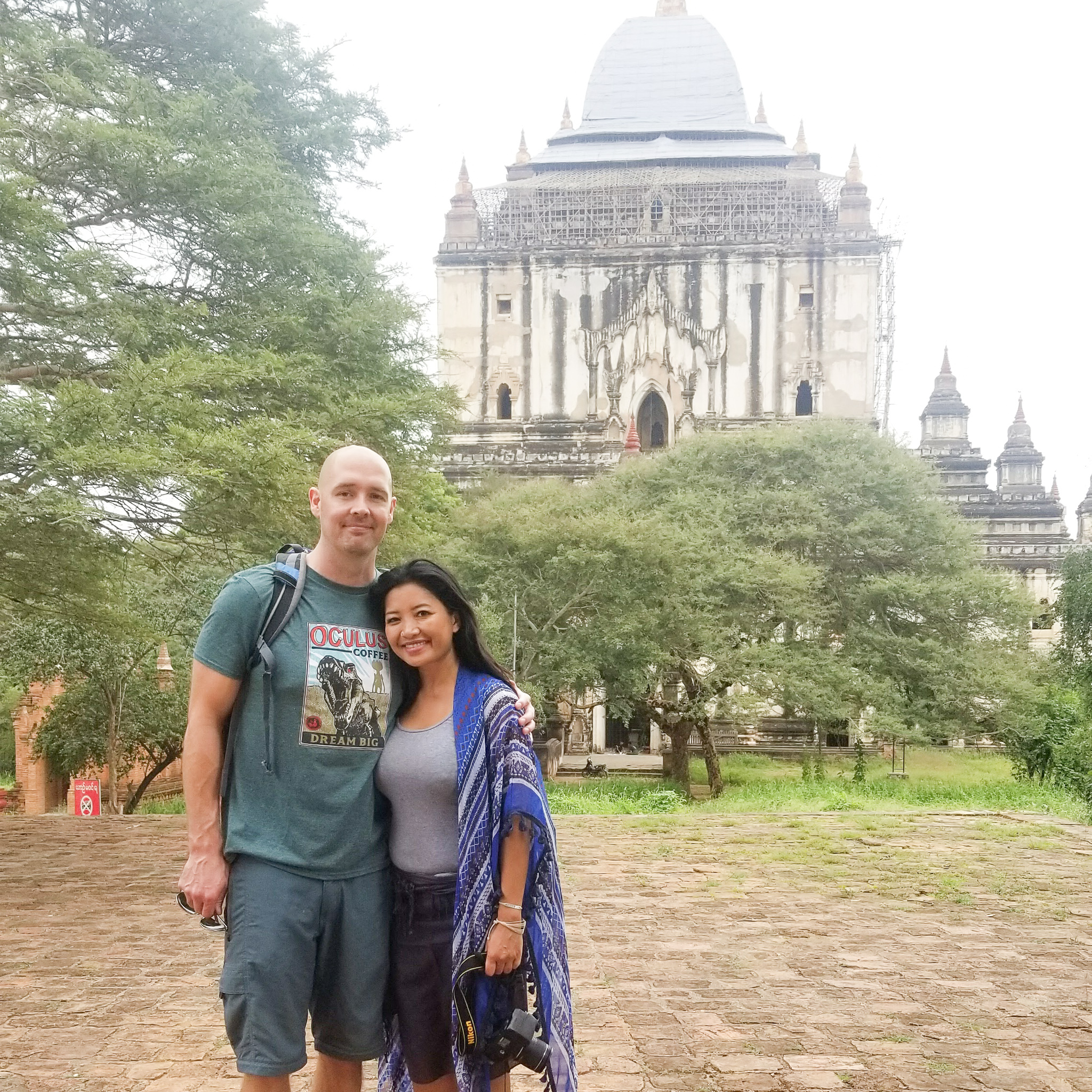 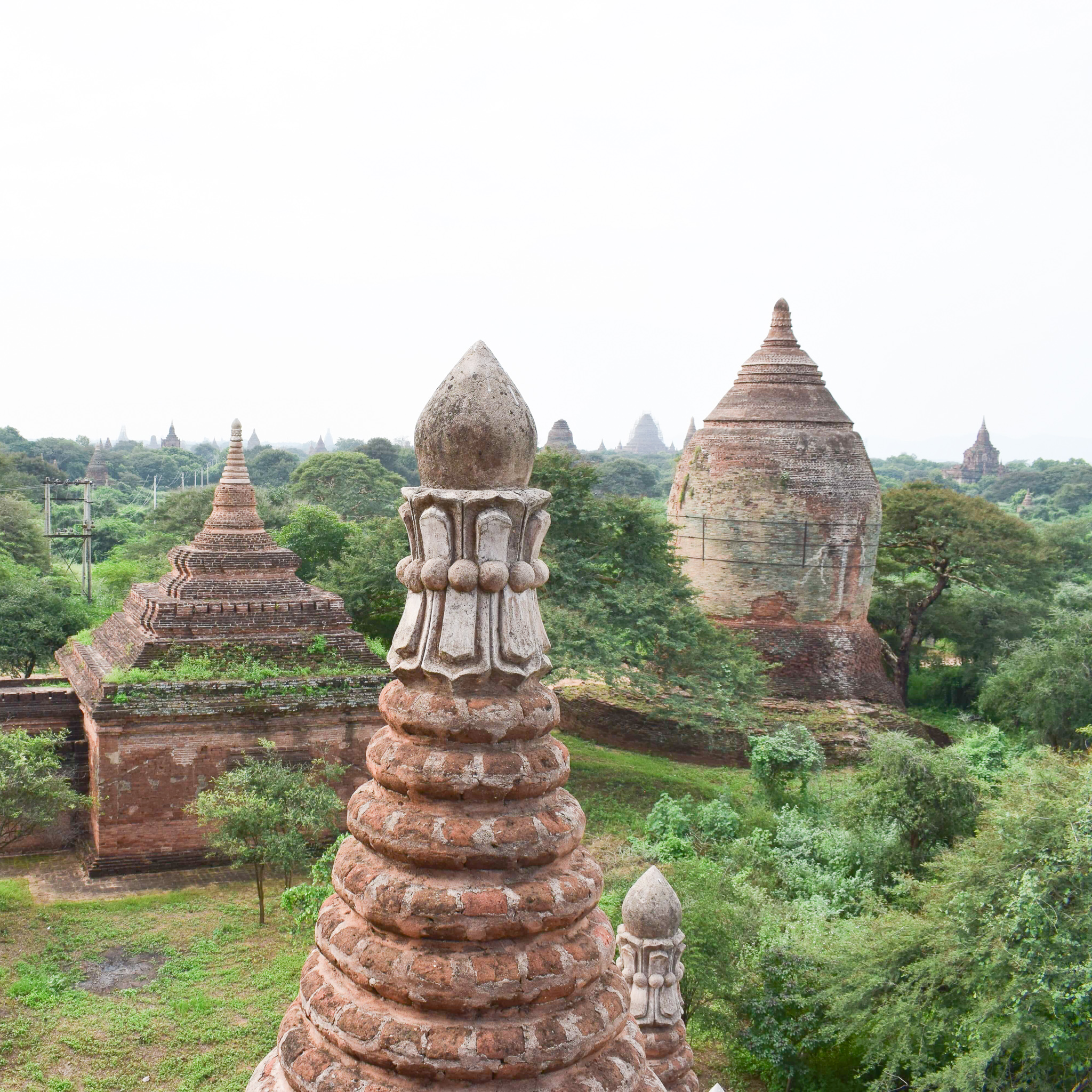 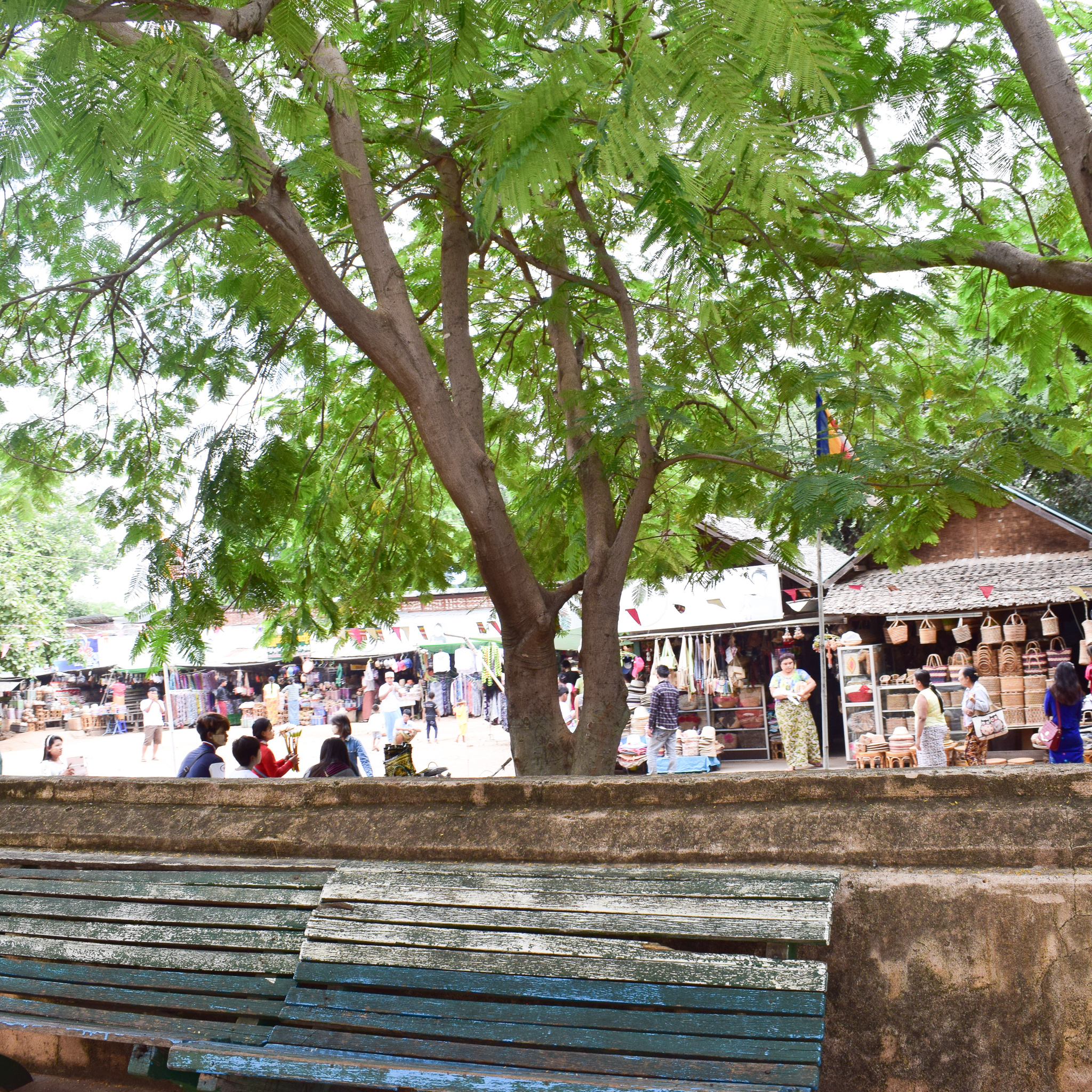 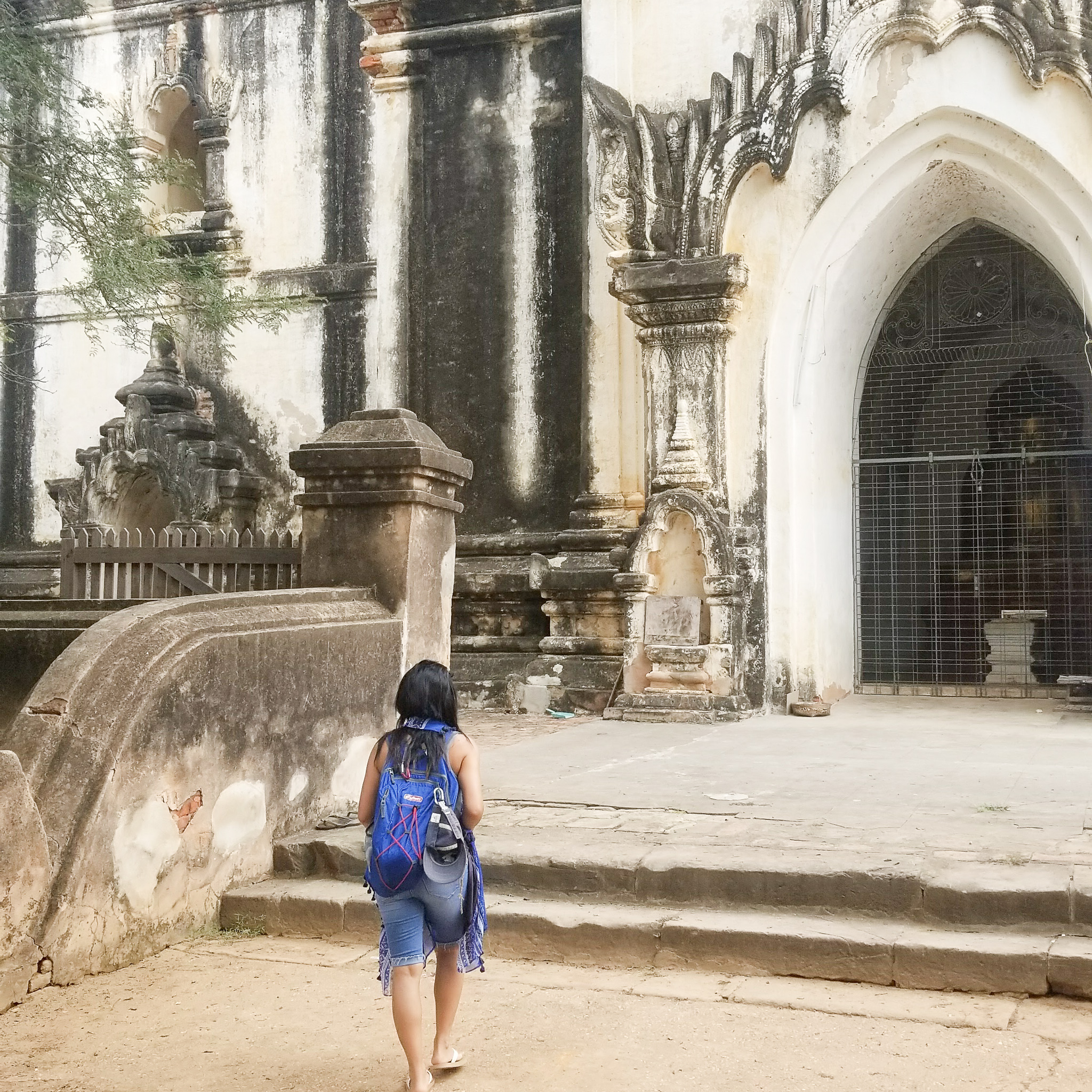 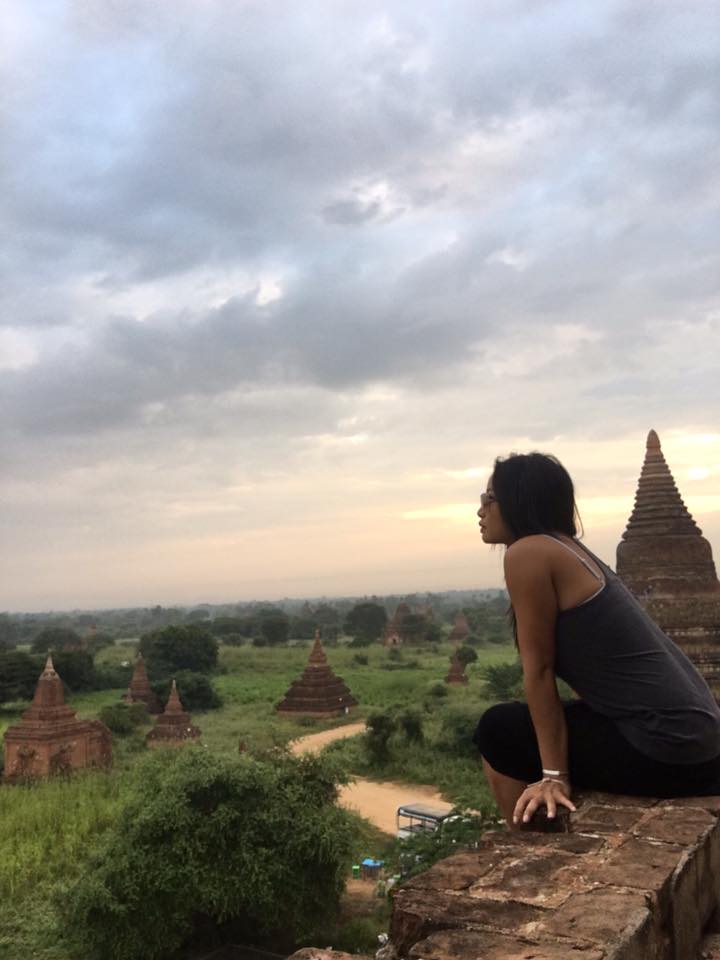 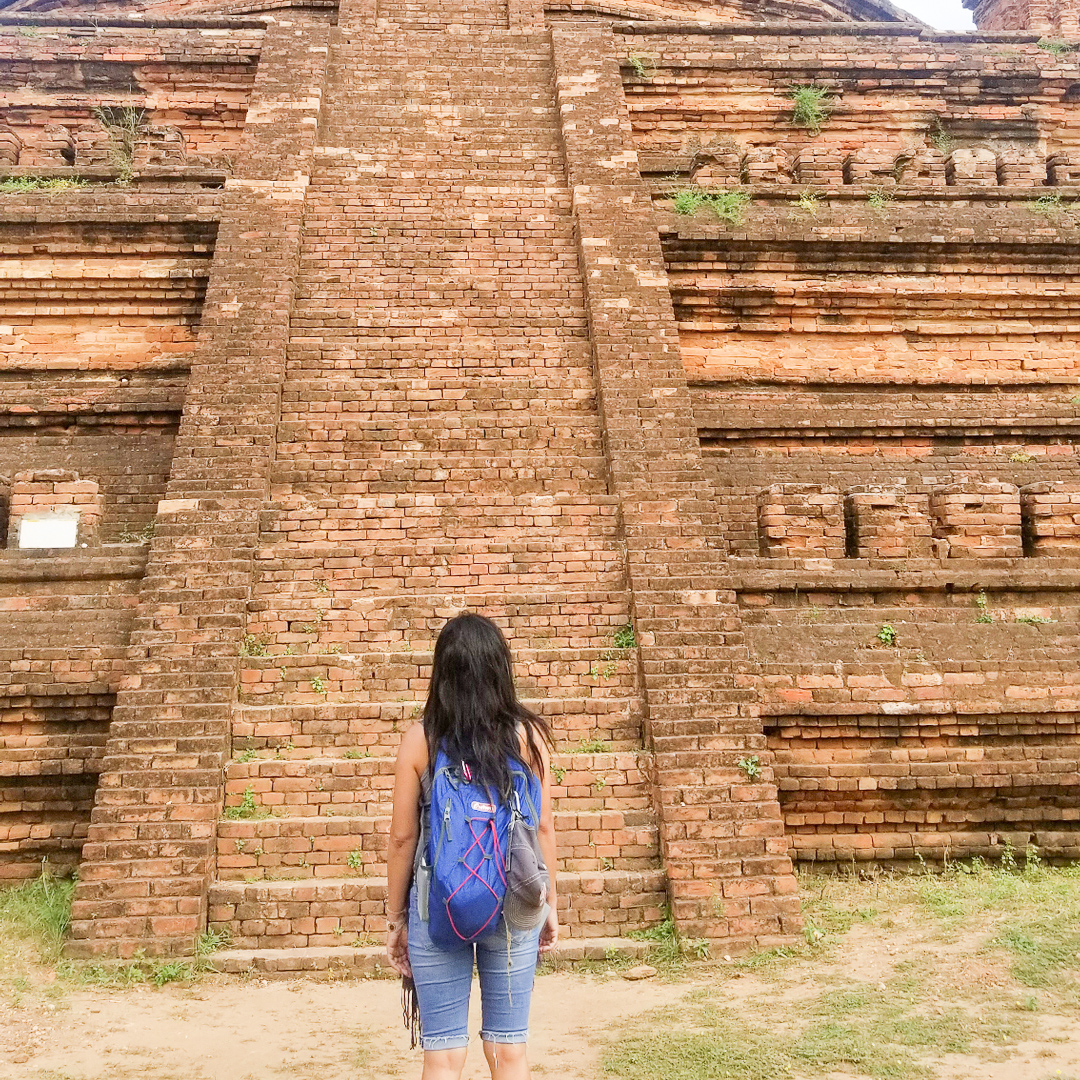 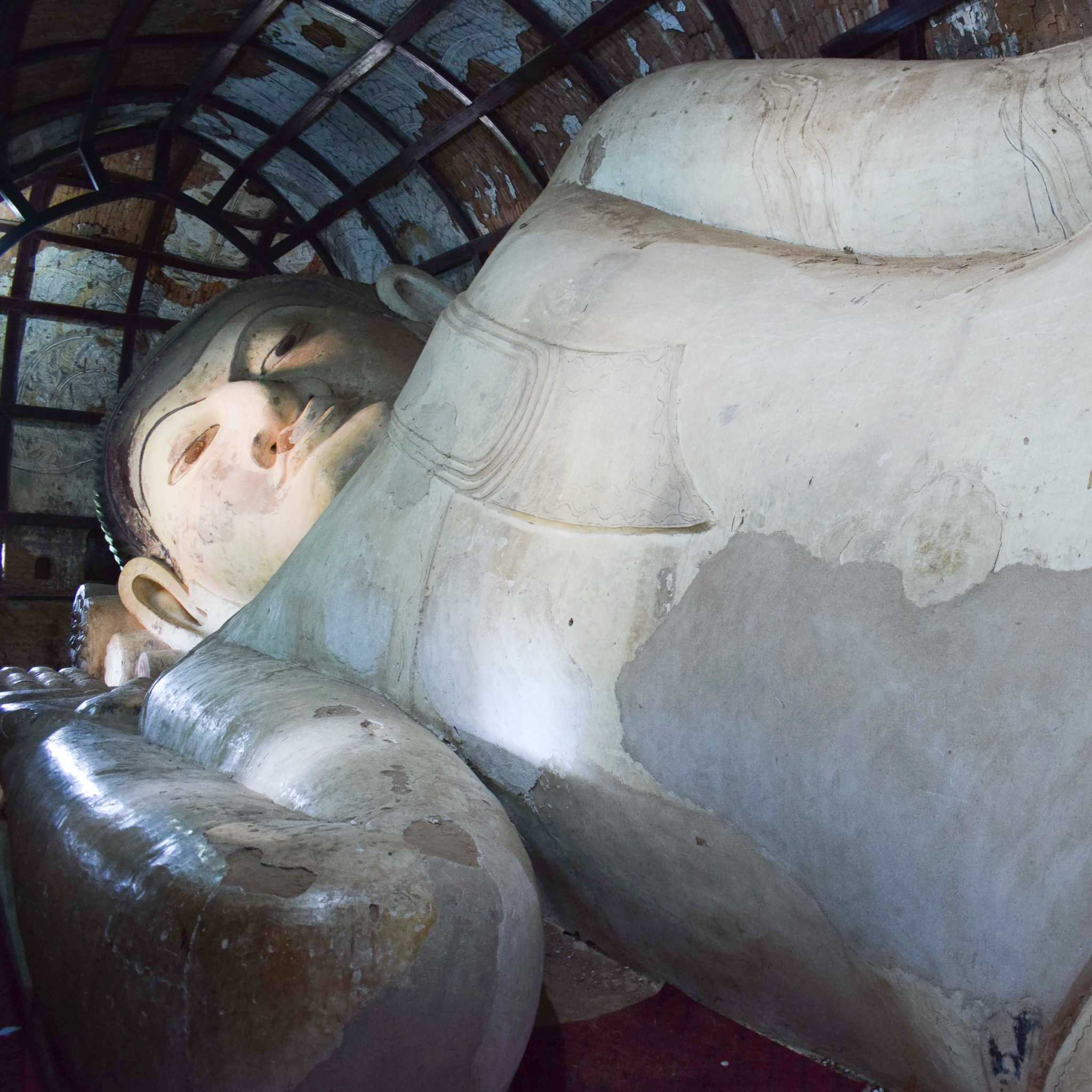 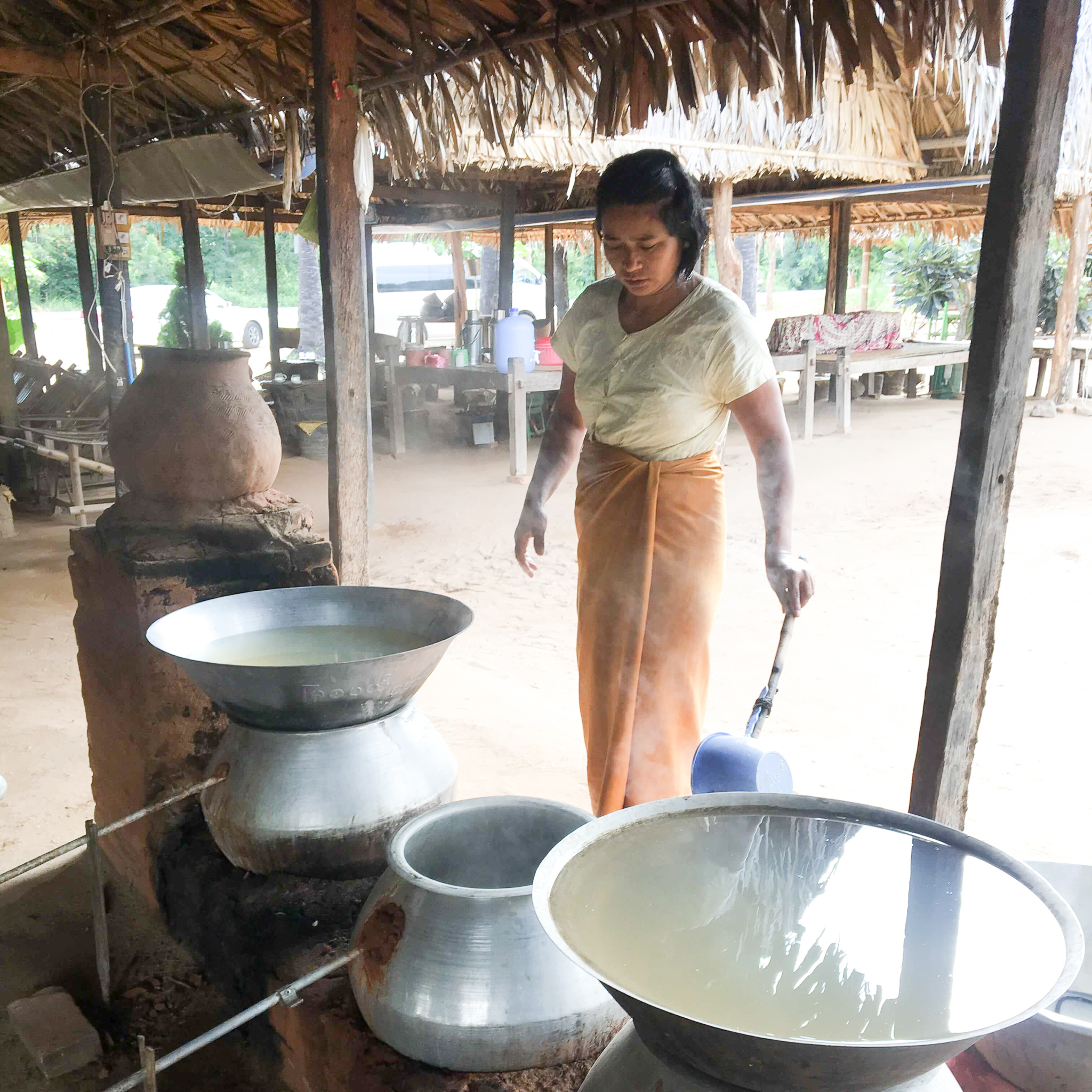 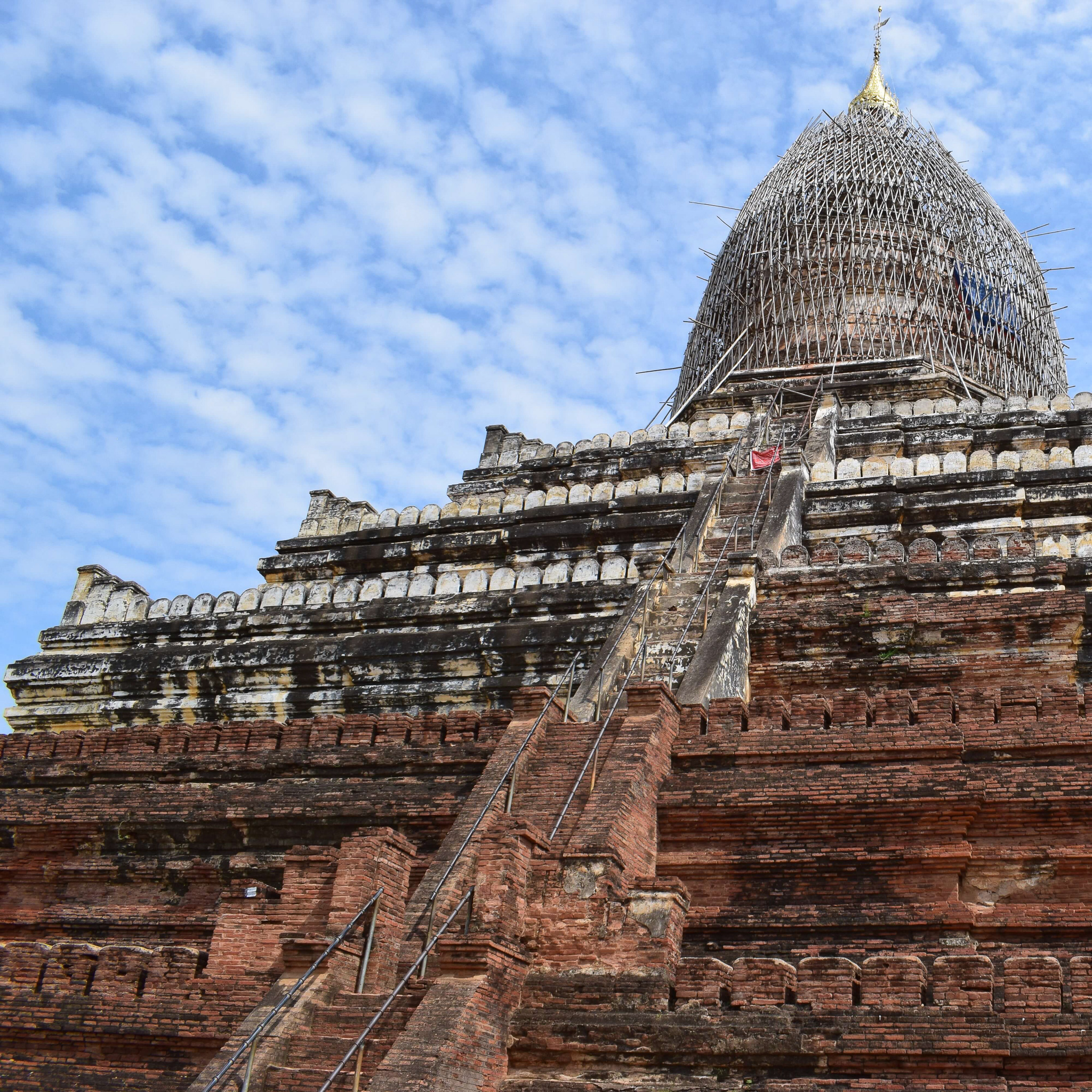 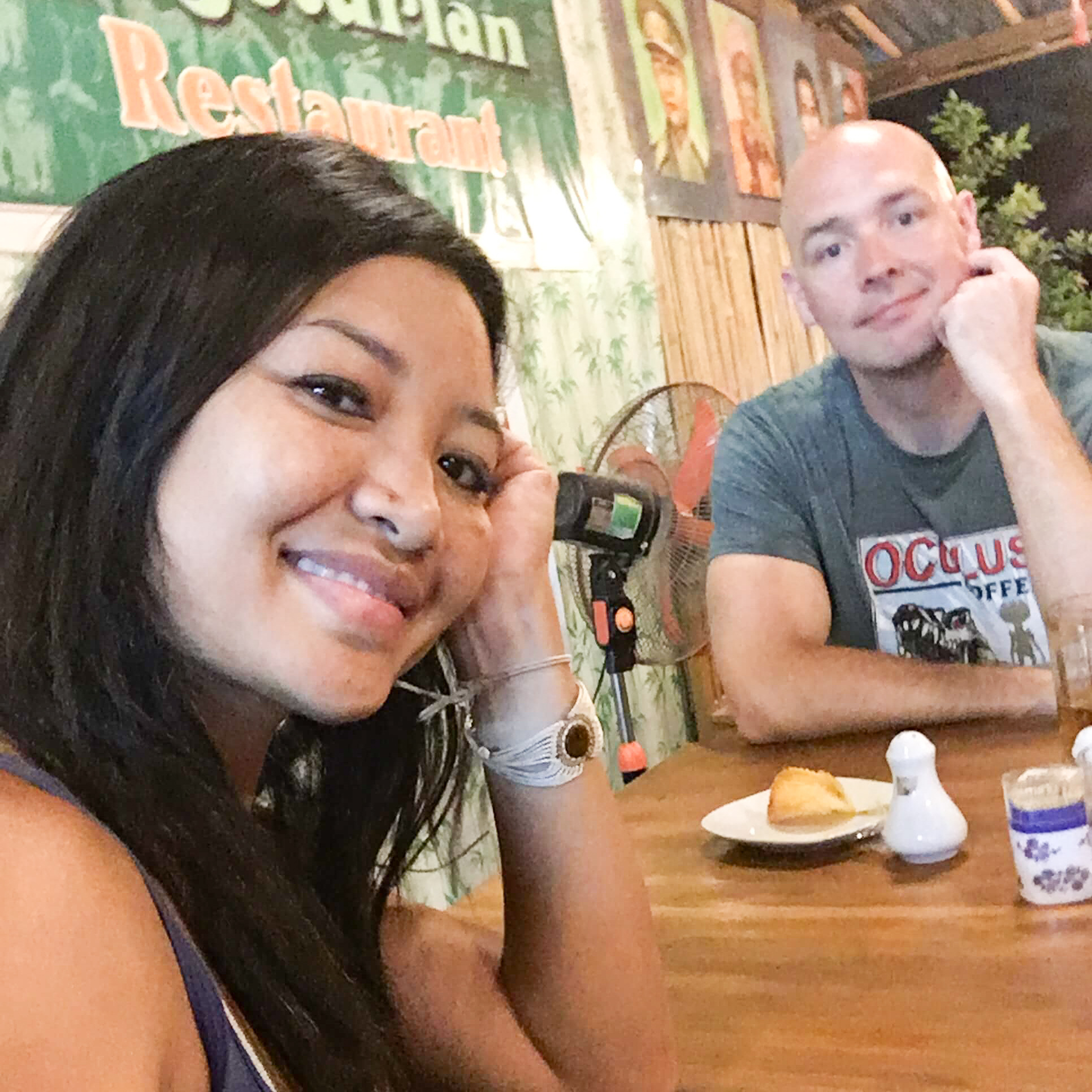